I've had quite a few layovers in Hapeville Georgia (it's growing!) and was wandering around trying to figure out what I wanted to eat, because of course it had to be somewhere new. I wasn't in the mood for biscuits or bbq, (though I usually am), so my options were limited and then I saw Smoothie King.
Who knew, an NBA arena was named Smoothie King? (probably fans who live in the South...)
I find it fascinating when I come across a 'national' brand or a really popular/strong 'regional' brand I've never heard of, but it makes sense I hadn't heard of it, as Smoothie King says they aren't likely to franchise in cold places, as the stores don't tend to thrive in those environments. Since I live in a cold place where rain drips and coffee is king, that makes business sense to me.
The kale/mango smoothie made by three, head in the cloud, teenagers was worth the wait, as I watched their endearing antics and interactions and the smoothie was absolutely delicious. 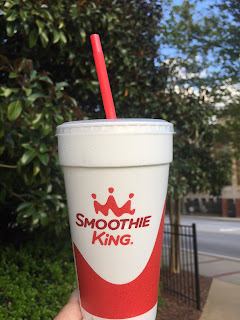 This sign brought me great amusement as it was written in handwriting similar to my children's, which isn't saying much! But, it also brought me joy because not everything has to be perfect and flourished to be delightful. 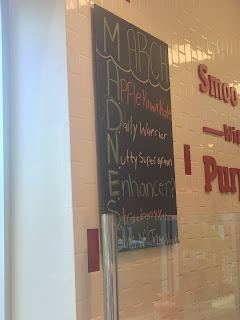 There are a plethora of foam cups to be found in the South....at least they're trying. 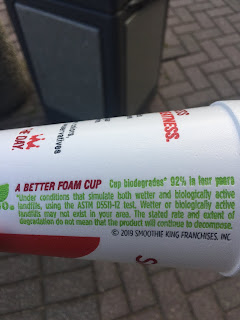