Been having some epic movie nights with the girls - 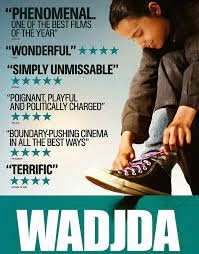 This is the first feature length film shot entirely in Saudi Arabia and made by a female Saudi director. Because of restrictions placed on women there the director Haifaa Al-Mansour was not allowed to interact with her mostly male crew and had to direct the street scenes from a nearby van, watching through a monitor and issuing instructions through a walkie talkie. WHOA.

I enjoyed WADJDA because it portrayed real life for a young girl in a part of the world that has a very different culture from my own. It isn't a political or violent movie, just a "this is how life is..." movie. There a few things I want to change there - I am woman, hear me roar!
That would do more damage than good in this particular instance, so instead I encourage you to watch this movie of a young girl as she pursues her dream of having a bicycle.


One Direction -  girls ALL over the world love them - craziness I tell you - I wonder if girls like Wadjda would fall in love with them too... I'm thinking yes, because Saudi girls pretty much have to "smile at the ground" and hide their beauty and according to 1D
"that's what makes you beautiful."


Who knew I could make a connection between these two movies, but I think I just did!

Niall? Harry? Zayn? Liam? or Louis?
What band will be all the rage next year?