We went to a drive-thru/stop-by outdoor baby shower and were given Runzas as party favors.
The Nebraska/Kansas hosts had to annunciate the name of this pastry a few times as we had absolutely NO idea what they were trying to say!!
It's considered one of the state dishes of Nebraska and a favorite of Cornhuskers.
I baked it in the airplane oven and it turned out nicely. It reminds me of a pierogi with a beef and cabbage filling. It was big enough for two meals. 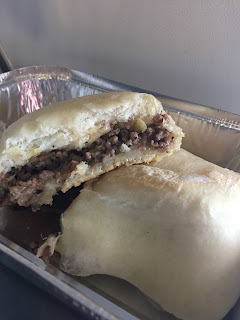 What's your favorite stuffed dish?
When was the last time someone said something and you didn't know if they were speaking the same language?
How much time have you spent in Nebraska?
Email ThisBlogThis!Share to TwitterShare to FacebookShare to Pinterest
Newer Post Older Post Home