I may be addicted to sugar.
My brother may be addicted to hot sauce.
He cooks a lot (which, I am a grateful recipient) and he puts squished capsaicin on just about everything including the meal we had tonight.
He has a subscription to The Heatonist and I tried these four sauces.
The bottom three, I found as whatever, I can handle heat, though I am not a true purveyor nor am I a chili head.
Then my brother brought out Apollo.
I had the tiniest dab on a tortilla chip, because I didn't want to ruin dessert, but if I was really going to try something new I had to go for it.
Welp, that tiniest dab almost did me in.
My nose was runny and my tongue felt like it had enlarged to the size of a pillow. I drank two glasses of milk, which didn't help right away, but after I ate a slice of cherry cheesecake pie, (it was pi day) my tongue, senses and sinuses returned to normal. Yep, sugar is what my taste buds were made for and cures what ails me.
If my brother and I were ever on Hot Ones Truth or Dab, well, he would probably lie so he could eat the hot stuff...which I would be very thankful for!
I can't imagine putting more than a tiny drop of Apollo on a meal and actually enjoying it...but I'm proud of myself as it is THE hottest hot sauce on the market right now and I tried it, survived, and didn't lose my dignity, shirt or my meal.
Notice how much is gone already...my brother actually uses and likes this! 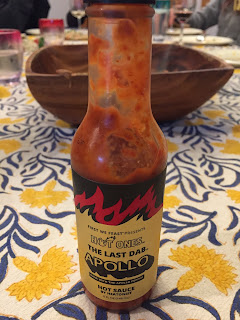 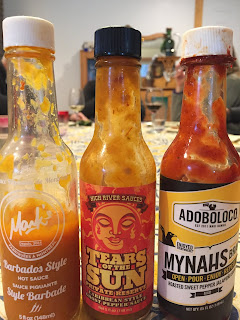